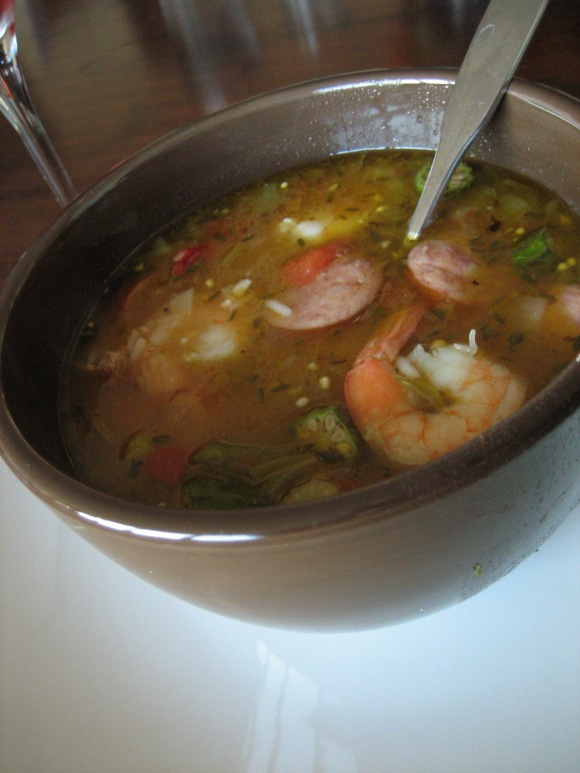 I think my first taste of gumbo was a pretty pathetic version that came out of a Campbell’s soup can.  To be honest, I am not sure I have ever had a really good, authentic Gumbo in my life, in spite of loving all the great ingredients that go into it.  Recently, our friend Shua, who is in the cast of the touring company of the musical Mary Poppins came to stay with us on his way to Minneapolis.  Indicative of his strange and uprooted existence, he brought with him a cooler full of meat – most of which he ended up leaving with us.  Thanks, Shua!  Anyway, there is a big package of smoked sausages in our freezer right now and, since the Bun is not a big fan of sausages other than Italian, I started looking around for recipes in which they would not be the main ingredient.  There are several different varieties of smoked sausage, including Kielbasa from Poland and Andouille from French and Cajun cooking.  All of them seem to work well in soups.  Since I have been having a bit of a craving for Gumbo lately – a better version of the stuff that comes in the can – I figured it was time to take a first stab at it.

Anytime I go about making something popular for the very first time, I do the same thing:  consult several cookbooks and websites on the recipe, then come up with my own version in my head.  I know everyone probably thinks that their Gumbo is the best, and I am sure that there are great recipes out there, but I like to formulate something on my own.  Basically, this is indicative of my philosophy on cooking; memorize the basics, and then make something your own.  With more complicated things (like baking, which is more of a science), I follow a recipe to a T the first time.  With something like soup, where there is less room for disastrous error, I play it by ear.  That way, I know what to do the next time without consulting a book or the internet.  It is basically implementing the rule of learning by doing onto yourself.  Just be fearless and it works out with delicious results.  Trust yourself and your tastes!

3 thoughts on “My First Gumbo”