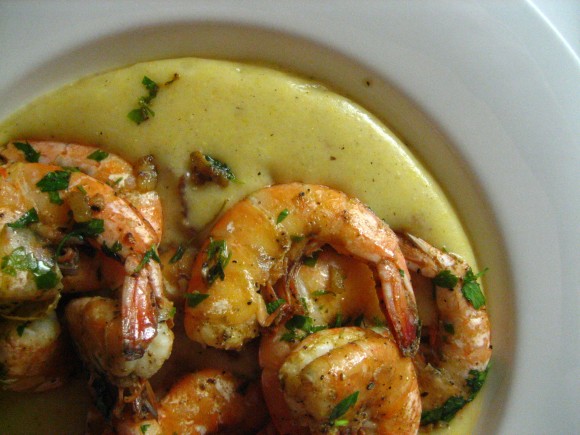 I don’t know who originally came up with the idea of shrimp and grits for breakfast, but I think it may be one of the most beautiful things you can look forward to in the morning.  There is something familiar about the texture of the grits, even to people who aren’t used to eating grits for breakfast.  For me, it brings me back to the days in my childhood where my mum would go through the extra effort of making cream of wheat for me before school.  Those mornings always seemed so warm and comforting, even if it was an ice storm outside.   The savory grits in this dish, studded with bacon crumbles, take comfort to another level.

As far as the shrimp component is concerned, I have to think that it was just a matter of what some southern American cook had on hand.  Sure, we eat pork and corned beef for breakfast all the time, but why not seafood?  It is kind of about honing your understanding of food origins, and thinking about cooking regionally.  If inland cooks are serving grits with fresh eggs from their chickens and cured bacon from their smokehouses, why wouldn’t low-country cooks serve them with some fresh-caught shrimp?  It is our luck now that these recipes have been distributed so widely, for we have the opportunity to gain the knowledge of cooks from everywhere, and from almost every time (I guess it would be culinary anthropology).  In other words, they did a lot of work in developing recipes, and now we can just enjoy making them.

That said, I am not a huge fan of writing recipes, but I do it when I feel it is warranted.  I am not sure, in this case.  What I bring to this dish is nothing more than a few extra flavorful touches, including bacon in the grits and a good, healthy dose of Old Bay seasoning on the shrimp, which are just sauteed quickly in some olive oil, butter, and garlic and tossed with some freshly chopped parsley at the end.  In the recipe shown in the picture, I left the shrimp shells on, but I highly suggest removing them, as they make for a mess when you eat them.  However, the shells do retain a lot of the seasoning, so if you are making this dish for only yourself or some people who’ll not mind sticky, gritsy fingers, go for it.

If readers are interested in more details about how to make this dish, I’ll be happy to post an official recipe.  Just let me know!

WOW!  What a great response!  Here’s the recipe, kids!  If you have questions, let me know.