The last time Christine and Chuck visited, Chuck said something to the effect of, “I’d rather eat anything that someone I know made for me than go to a restaurant any day.”  It made me stop and think a minute and I decided that, almost every time, I would agree with him.  There is something about food that someone chooses to make for you – no matter what it is – that tastes especially satisfying. Luckily, my gracious friends pretty much feel the same way, or at least they make every attempt to appear that way.  Even when a dish comes out badly (overcooked meat or vegetables, a half-risen cake), I’ve had the luck of seeing smiling faces and clean plates.

When I asked the Bun what he wanted for his birthday dinner – mainly, whether he wanted to go out or stay in – he gave me a little look that said, “would you mind cooking for me?”  Of course, I was pleased with his answer.  After deliberating on a menu for a few days, I decided on a bit of inspiration in the form of pork rillettes, which is basically like a meaty, fatty spread you eat on bread.  It is, of course, French.  A French meal, of course! 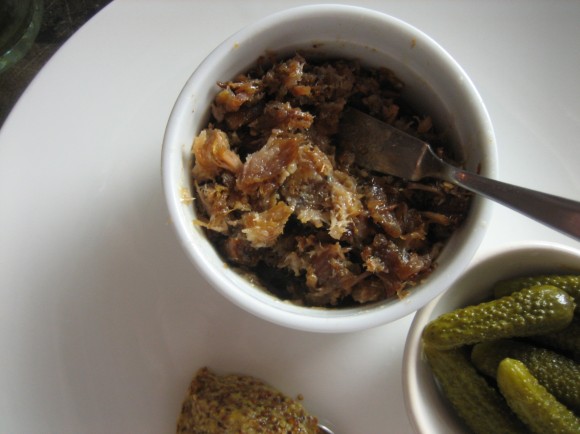 As I do, and as many of my cooker friends do, I consulted several sources in an effort to find a good, simple recipe for the rillettes, including Julia Child’s cookbooks, Epicurious, and a clever site that is new to me called The Paupered Chef, which is brilliant.  The rest of the menu fell into place from there, knowing that the Bun would want Strawberry Pie for his birthday dessert, and knowing that I wanted to make steak, have a cheese course (simple, domestic Brie) and a salad course (endive with walnuts and an amazing local Amish blue cheese).

In the end, it came together pretty well.  I even made wine pairings, serving Kir Royale with the rillettes, a dry rose with the salad, and a young red with the steak (which I served with boiled potatoes that I sauteed in butter and some simply steamed green beans).

So, for the next birthday, anniversary, or celebration in your life, consider making a meal that you would like to eat yourself and I guarantee your guests will appreciate it.  Multi-course serving is, of course, optional.  =)